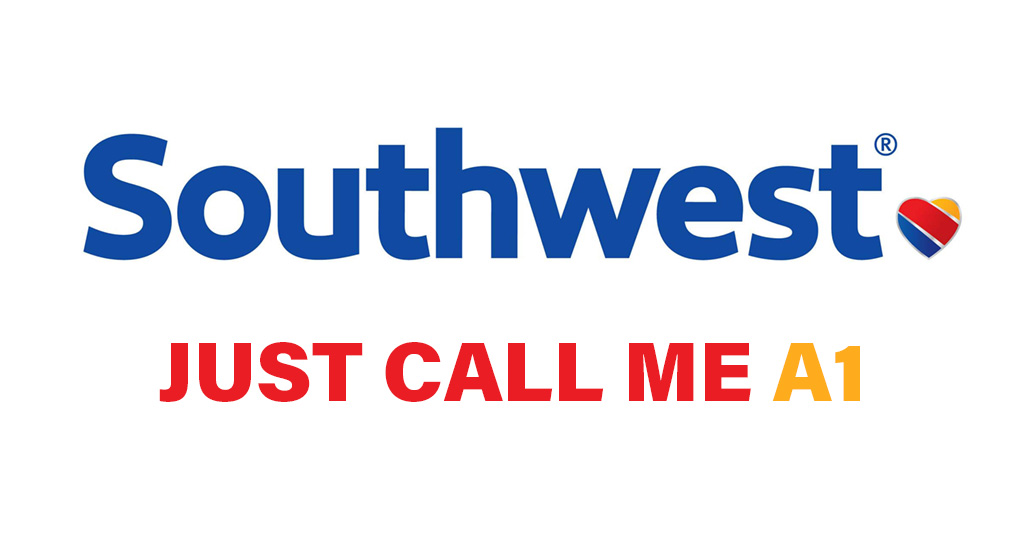 Recently in my travels back and forth between my offices in Phoenix and San Diego I was pleasantly surprised to find that the elusive Southwest Airlines boarding pass A1, TSA pre-check ticket was awarded to me. This of course means I get to board first and have the least amount of hassle possible in today’s airline travel world going through security and shorter lines, etc.

Now if you know my sense of humor you know that I made a big deal out of the fact that I had something to do with this stroke of luck and in fact had worked hard on it, when I just happened to sign in early and get lucky. After a long week of meetings and being out of town it was a nice surprise. What’s even funnier is that I had posted a picture of my digital boarding pass online and my friend Joe had made some comments about how admirable it was that I was able to snag that ticket as he was C40 on a Southwest flight the day before. So I called him from the front of the line while waiting to board and told him his new nickname was going to be C40. Several people had heard me talking and I was joking with them about how this was the golden ticket of Southwest Airlines, the elusive A1 TSA pre-check ticket. We all got a good laugh out of it. Then my IT guy called up and told me to take down the boarding pass screenshot on Facebook I had shared as people can read information on there and it is sharing my private info. Humility lesson #1.

You can imagine my disappointment when waiting for the flight to board. They announced that they did not have a pilot for this flight and that the 5:20 flight was now going to not be flying out till 6:20.

About 30 minutes later after sitting down and watching and listening for announcements, I started talking to some of my Landa reps that were on another flight home, I noticed that they were boarding my flight. This was way before 6:20 and I had not heard any announcements. I ran back up and got in line as people were boarding and asked the person ahead of me what number they were and they informed me they were A44. My fleeting moment of Southwest Airlines travel greatness had fast disappeared. I boarded and could not believe that I had missed it. Humility lesson #2.

What’s even funnier is that some of the people in the front of the line before with me who were already on the plane said “Hey look, it’s A1! What happened to you?” and I went palms up and humbly admitted I had blown it and we all got a good laugh out of it.

Later on I was thinking my experience paralleled owning a company and running a business in many ways: